Apparently Sony posted a message that “an outside party” may be responsible for the PSN outages (which could last another couple of days). And this message was posted by the Anonymous Facebook page:

"Take a break from online gaming for a while... it will help your skills, your health, and your emotional levels, which by the way are a bit out of order if they are being shackled by the PSN being down. We have no qualms about our actions, even though it may affect fellow anonymous or supporters... we hope they understand the bigger picture." 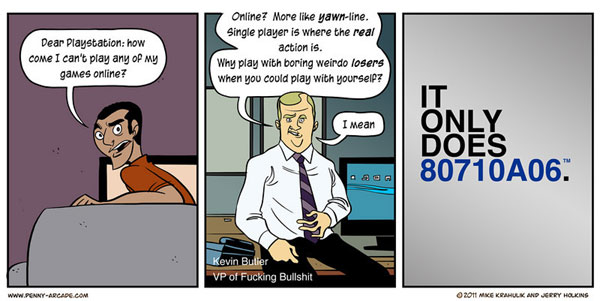 Obviously this doesn't take away from Sony's poor handling of the situation, but as someone who's pretty indifferent to Anonymous, this kind of pisses me off. If it's true of course. I wouldn't care so much, but this comes just after the release of Portal 2, Mortal Kombat, SOCOM 4, and the Infamous 2 beta. Here's a link to the article.

UPDATE: Over a month later and PSN is finally back and running. Sony has lost billions in profit and branding, and along with gamers everywhere, is keen to hunt down the hackers responsible. It’s still unclear whether Anonymous was responsible, or if was a splinter cell claiming to represent the group. Regardless, Anonymous’s reputation is almost as damaged as Sony’s. The hacking of American credit details have even raised the ire of U.S. congressmen. On the plus side, Sony is offering two free games and a 30-day PSN+ subscription, as part of their “Welcome Back” package.