This is a painting by William Blake called “The Great Red Dragon and the Woman Clothed with the Sun," and it depicts a muscular, winged demon waiting to devour the child of a pregnant nymph. The image was inspired by the opening verses of Revelations XII which describe a beast of “worldly power” standing over a woman (symbolizing Israel), oppressed in her innocence by the wicked. In the film Red Dragon, [SPOILERS] the serial killer Francis Dolarhyde (a.k.a. the “Tooth Fairy”

believes that he has been possessed by this beast, which forces him slaughter entire families every full moon. At one point in the film, Dolarhyde tracks down the original painting and devours it, in an attempt to rid himself of these dark homicidal urges, but his Dragon persona re-emerges nevertheless. 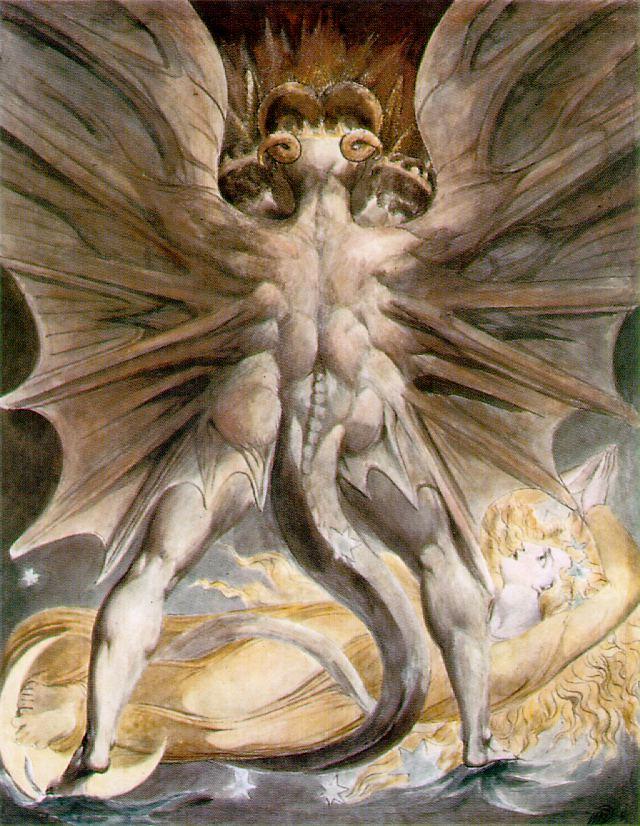 It is revealed later on in the film that Dolarhyde owns a copy of the painting, and also has the image tattooed over his body. This reinforces the idea that he has become completely submissive to the Dragon’s voice and will, and considers it a major part of his physical and spiritual identity.

Detective Will Graham, who is investigating the crime-spree finds a Chinese character carved onto the branch of a tree outside the house of Dolarhyde’s first victims. The marking is the Chinese symbol for “red dragon”, and it is this clue that leads Graham to Blake’s painting. When discussing the case with Dr Hannibal Lector (an intellectually brilliant, but criminally insane psychiatrist), it is speculated that Dolarhyde suffers from a violent form of schizophrenia, and that his Dragon persona is merely a coping structure formed subconsciously in order to act out his perverse fantasies; the personification of his blood-thirsty shadow-psyche. Though, from Dolarhyde’s perspective the Dragon is more like an all-powerful, almost god-like entity which commands him to kill. It is difficult, even for someone as brilliant as Lector, to determine what the Dragon’s true design is. That is to say, where does the Dragon end and Dolarhyde’s own personal desire to murder begin?

It is in this way that Dolarhyde is like Graham. Both characters are tormented by their primal instinct for cruelty. As the film reveals, Graham’s greatest fear is that he differs from the likes of Lector and Dolarhyde only by a slim barrier erected by personal choice; “that he is really a deranged and demented being who chooses to engage in an eternal standoff with his darker impulses”, while using this curse to “hunt down those who would not share his fight” (Wikipedia). Perhaps what author Thomas Harris is trying to convey through Blake’s painting is that we are all at odds with our own nature, and must fight to be good; to not give in to the inherent savagery of the human condition [/SPOILERS].