With the impending release of Battlefield 3, the growing hatred for the Call of Duty series has reached a boiling point. Gamers (including myself) are continually flawed by each gameplay video of this upcoming title, with a host of gaming bloggers and YouTubers declaring Battlefield 3 the “COD killer”. While I feel COD gets a harsh wrap amongst gamers, I can sympathise with their distain. Like Tony Hawk and Guitar Hero, COD has become blockbuster franchise, with new installments released every year. Since the developers have been using the same engine for the past 4 years (a modified version of Doom 3) many gamers see the series as little more than glorified map packs. The popularity of the series has also turned off a lot of gamers, with its fanbase seemingly composed of ADD afflicted, prepubescent brats. Not to mention the diva-like behaviour of their core studio, Infinity War, and the almost James Bond level villainy of their publisher, Activision. So I thought I’d offer some thoughts as why the original Modern Warfare game was so highly praised, back in 2007. 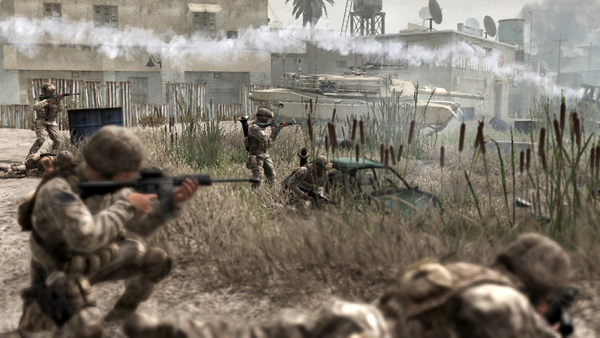 After a decade of WWII shooters, gamers finally got a fresh, modern take on the FPS. Advanced weaponary; an emphasis on stealth and strategy; much improved enemy and ally AI; and a real sense of speed and desperation were all part of the games appeal. Modern Warfare was also much less linear than previous shooters. You could try an outflank the enemy via a number of routes, make use of explosives as distractions, or you could just run and gun; all required a degree of skill. Also impressive was the dialogue, which (while implausible to an actual soldier) had a sense of realism to it; and of course the voice-acting was top-notch for the time. And of course the graphics and level design were absolutely gorgeous for 2007, and still hold up today. Most importantly, however, was the multiplayer. It was simple enough to learn, but required weeks and months to master. The use of kill streaks encouraged practice and strategy; and the perks and guns were well balanced. The idea of prestige also helped balance the combat; as skilled players were working with less advantages. Many reviewers and gamers at the time saw Modern Warfare as the spiritual successor to Counterstrike, and to an extent they were right.

So, overall, it was the games fresh new FPS mechanics and excellent multiplayer that made it popular and critically acclaimed. While this has faded over the past few years with the avalanche or Modern Warfare clones and sequels, I feel that it is still a quality game that deserves its popularity. I think the main reason Call of Duty inspires such fanaticism is because, for many kids, it served as their main introduction to video games. And like most of the newly baptised, they see the world in very black and white terms. Call of Duty is their saviour, while its rival Halo, is damnation. The tourists will follow its long decent into oblivion (see: Sonic series), while the proper gamers will expand out into other games, and maybe start to look back on all of the games that influenced Call of Duty. Modern Warfare 1 and 2 are fine games (maybe not entirely original, but certainly enjoyable), however this third installment is just silly. I thought the series was supposed to be covert warfare and intelligence gathering, not a global conflict engulfing multiple nations. What's MW4 gonna be, an alien invasion? Actually, I could be down for that.