This essay will begin by investigating the poetic structure and overarching narrative of the piece, as well as an examination into its theme of man’s place in the natural world, and the religious connotations that inspires. We’ll then explore two distinct allegorical readings of the poem – Christ’s death on the cross and the schism between England and the Roman Catholic Church.

The Garden and Sea at Dunwich recounts a fierce storm attacking the English seaside town of Dunwich. The constant crashing of the waves against the coast carves up the earth, tearing away at the foundation of several churches. This constant erosion eventually causes the structures to crumble into the sea, leaving only its surrounding flower beds unmarred by the storm. The poem describes these “amber roses”, now free from the buildings constriction, as gifting the air above the wreckage with a beautiful perfume. While trawling for pilchard and cod, the town’s fisherman begin to rake in pieces of the lost churches stained-glass windows. The narrator expresses grief in the fact that these rose-tinted shards no longer resemble the splendid artworks that once adorned the monasteries.

Although steeped in potent religious and natural imagery, the poem itself demonstrates very little structure. It does not rhyme and lines can range from as many as 11 syllables (e.g. “ambiguous pieces with angelic eyes” ) to as few as 5 (“they go their own way” ) without any discernable rhythmic pattern, making it an example of free verse. However, the poem does play with the sound of language, employing alliteration, such “by wind, by wave” (emphasizing the encompassing and urgency of the storm); “remains as reliquary” (alluding to the fading relevance of religion); and “attar of ancient” (meaning the rose’s scent has been repressed for ages). The lines “surf, on brief shore… spill splinters of the seraph’s sword” uses the letter “s” so much the reader is practically hissing, denoting the idea of a snake, with the following line mentioning the “firstborn garden”, Eden, which Satan was able to corrupt by transforming into “the Serpent”. The line “ambiguous… angelic eyes” furthers this idea of a deceiving entity camouflaged by a “human compassion”. Towards the end of the poem is the phrase “mated with mute mouth”, which could symbolize any number of things, and is discussed further below.

One of the major themes of the poem is the struggle between man and nature. Human civilization is treated as transient and oppressive, with the roses being confined in the church’s garden, to be cut and primed by the monks; their natural beauty and fragrance muzzled for vapid cosmetic purposes. Whatever cultural and historical significance is pasted onto the monasteries by the surrounding community is effortlessly cut away by the erosion of the earth and movements of the sea. This evokes both the idea that nature is fighting back against people, and the fragility of our societal infrastructure. This thin layer of real estate known as Dunwich is an entirely temporary landmark to the millennia old eco-system that exists there.

Considering the relatively omnipotent scope of this perspective, the final line of the poem—“the human accents of my name”—makes me think that the narrator is God, possibly working through nature to keep people in check. The narrator not only condemns humanity’s need to restrain and govern nature, but also the controlling and oppressive design of the Church, which he sees as “harboring an amethyst shadow” hiding behind a façade of “human compassion”. This links to the idea of the Church being formed, not to help and protect people, but to control them by offering paradise, but threatening damnation. That the Church in fact hinder God’s connection to his people; religious bureaucracy managing to make their mouths “mute” and prayers “vagrant” (i.e. idle and wandering); the clergy twisting Christ’s message of peace to suite their own wicked design.

If the narrator is indeed God, then he expresses great sorrow at the corruption (see: “erosion”, “dissolution”, “splinter[ing]" ) of his creation in the “firstborn garden” (Adam and Eve). He describes people as a “pattern severed” from what he had originally envisioned (“from the one [he] thought [he] knew” ). The poem continually juxtaposes ideas of faith against nature (e.g. “an aquamarine resurrection” ), perhaps arguing that the path to God is through nature, not religion.

The poem is drenched in religious imagery, and can be read as a metaphor for the Crucifixion. The narrator (perhaps Christ himself), describes a series of churches being “betrayed by their own foundations” and making a “solemn procession” into the deep; alluding to the treachery of Judas, and Christ’s tortuous journey from Jerusalem to Mount Calvary. He refers to various symbols of the Crucifixion, such “stigmata” (the wounds of Jesus) and the “resurrection” (Jesus returning to life on the third day). The “rising” above the surf, may signify Christ’s final ascension into Heaven.

In the same vein, the “roses” mentioned can be seen as the faithful disciples, left behind on Earth to continue his teachings; no longer guided by the “monk’s hand”. These “fisherman toil[ing] their nets”, are the Apostles spreading (or “trawling” for converts) the word of God, in Christ’s stead. This metaphor works because most of his disciples were originally fisherman; and the continuous allusions to the tide, the waves and the sea evoke the idea of baptism, and the birth of Christianity in Christ’s death and “aquamarine resurrection”. If we take the narrator as Jesus himself, as inferred by the final line, his description of “human compassion” “mated with mute voice” may be his summation of Christianity at this point in time; a noble concept rendered impotent, for the time being, by the meek breadth of its followers.

As well as being set in an English coastal village, the poem explicitly refers to the “rose”, traditionally a symbol of England (see: the Houses of Lancaster and York; National flower). In this sense the poem can be read as an allegory for the Protestant Reformation. The narrator describes a garden of “amber roses” released from the monk’s guiding hand, here representing the Roman Catholic Church’s oppression of England. He lament’s the “dissolution” and “erosion” (or corruption) of his former faith “from the one [he] thought [he] knew,” and is know severed from that “pattern” of ritual. The poem repeatedly alludes to this fracturing of Christianity—summoning up images of “fragments”, “shards”, “multifoil”, and “splinters”—and the Church of England’s “aquamarine resurrection” (the country being, after all, an island). The earthquake is the most obvious symbol of this division.

However, the narrator nourishes a suspicion that God will wield his “sword of flame” to retake England for Roman Catholicism (“the firstborn garden” of the faith), a fear which was eventually realized under Queen Mary I. He questions Protestantism as an “amethyst shadow”, hiding behind “angelic eyes” and a veil of “human compassion”, his dread now compounded by the retribution leveled against those who would practice the old religion. The narrator is trapped somewhere between a faith he questions and one that has been repressed, thus rendering his mouth “mute”; his prayers to God “vagrant”.

The poem Garden and Sea at Dunwich can read and interpreted in many different ways, from the literal narrative of the storm attacking Dunwich; to the struggle between man and nature; the crucifixion of Jesus and England’s separation from the Catholic Church. The poet has poured beautiful, striking imagery into this piece, converging ideas of religion and nature, and the corrosive nature of human civilization. One can’t help but wonder what ideas and themes the original author intended to impart on the reader, and what other messages can be lifted from its words, depending on what time you live and culture you inhabit. 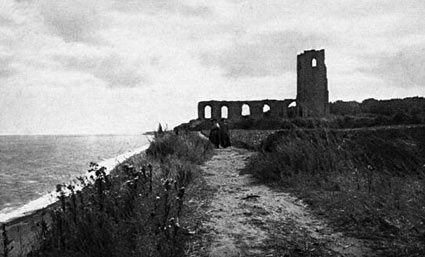