Recently I've noticed how little I actually use the TV speakers while playing games. I always use headphones, even for movies. I find that it creates a much nicer atmosphere; it's more immersive, you can detect all of the subtle sound queues that would be lost in speakers, and it blocks out unwanted noise. It also helps you focus a lot more on what is going on on-screen, since the audio isn't being filtered. I suppose if I had a surround sound system it would be even more immersive, but those are a couple of hundred dollars at least, whereas a good pair of headphones is only $30-40. Also, I live in a dorm, so I can't really be blasting Mario Kart through my speakers at 2 in the morning. 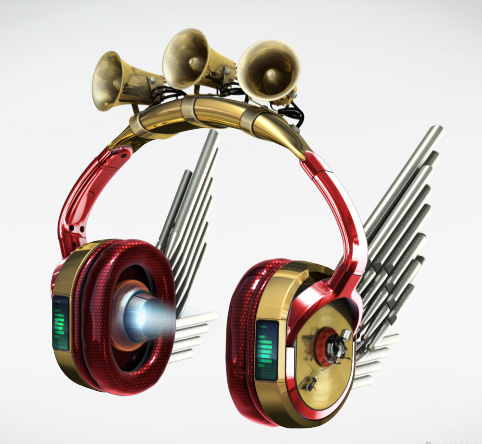 You don't actually need an audio jack in your TV to set up headphones. You just need to plug a red and white cable into the audio-out jacks on the back of the TV. Then, in order to connect that cable to a headphone cable, you need to buy a little metal thing that can receive a plug at each end (Freudian slip). I can't for the life of me remember what they're called, but I just explained that I wanted a wired headphone setup at my local electronics store (Dick Smiths [more slips]) and they gave me the cable and the little metal thing. It only cost $12 and $4 respectively.

Now, the only thing is that, on this setup, the volume will be at a set level. It doesn't matter whether you mute the TV or turn it up to 100, the volume on the headphones will remain at a medium level. In order to control the volume on the headphones, you need to buy another red-white audio cable and plug it into the auxiliary input of a stereo. Then plug the other end into the little metal thing. Now you can plug your headphones into your stereo and control the volume via the dial, or you can unplug you headphones and listen through the stereo speaker. I guess it depends on the setup of your room, or whether you mind a few cables, but apparently a wired connection has a much better sound quality that wireless.