The History of Gaming (VG article)

Imagine you are stalking through the ruins of a futuristic science facility. Your muscles ache with pain; your deep wounds crusted shut with dry blood; your mentality is fixated on one single goal… survival. Stealthing from room to room on the balls of your feet, AK-47 in one hand, to clutch [green] blood-stained machete in the other. You pass the mangled corpses of militia and scientists alike, when suddenly a savage mutant springs out from the shadows and leaps onto your face. It gnashes its teeth, acid dripping from its gums onto your terrified face, makes a blood-curdling scream and lunges in for the kill. You side step left; tear out your pump-action shotgun and—PAUSE: Bathroom brake 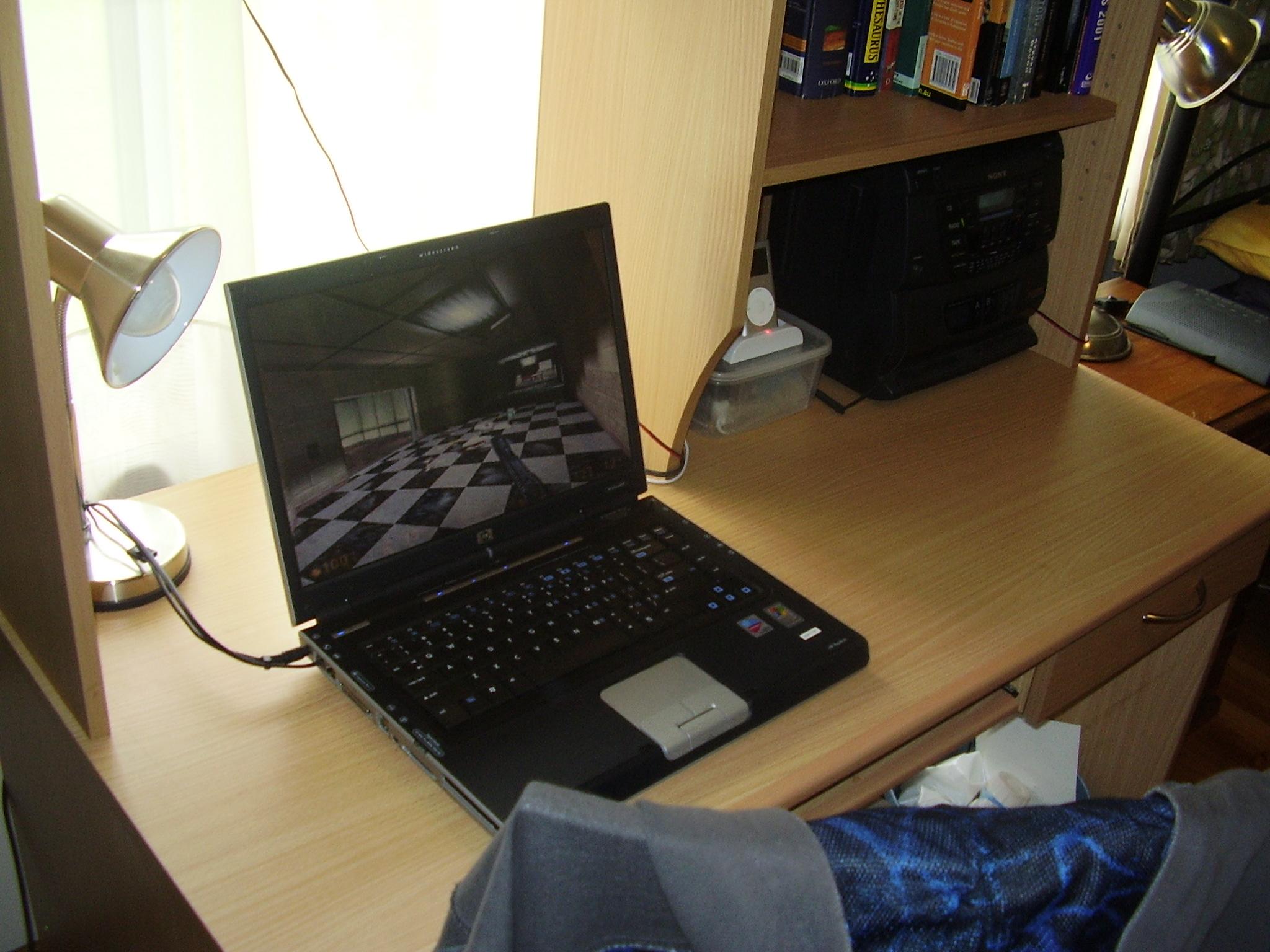 This is the gaming universe - an entire galaxy of armed combat, online battles, intergalactic warfare, and role-playing adventure; sitting there, perched, on the second shelf of your TV cabinet. The innocence of games like Pong, Tetris, and Pac-Man are over, their time has passed. What was once a string of fun electronic puzzles is now a breath-taking enterprise.. An epic war has emerged between three of the greatest empires of the digital revolution – the powerful Microsoft; the ambitious Sony; and the artistic Nintendo… and Generation Y are its soldiers.

Believe it or not, the computer/video game industry is amoung powerful and profitable markets in the world; second only by the music industry. For those not familiar with the gaming medium (e.g. Eskimos), the term “computer/video game” refers to a game played via a video display (such as a monitor or television) as the primary feedback device. The only difference between “computer” and “video” being that the former is played on a PC or laptop, and the latter played on specifically-designed set top boxes (called a console) through a TV. Video games can also be played on mobile phones, PDA’s, or other handheld devices. Despite technological advancements throughout the 90’s, video games trace their origins way back to the 40’s. In fact, the company Nintendo was actually founded in late 1800’s.

The very first computer game was a missile simulation game, developed in 1947 for the Cathode Ray Tube. Players adjusted the curve and speed of the missiles by turning various knobs. The game was probably inspired by radar displays used during World War II. Five years later a second game was released – OXO: a graphical version of noughts and crosses. In 1958 the third, and perhaps most important video game, was created by William Higinbotham to entertain visitors at Brookhaven National Laboratory in New York. The game was called Tennis for Two and foreshadowed the arrival of the cultural phenomenon that was Pong. For the next 25 years video games made little progress. Most games were devised on university mainframes. Notable developments occurred during the 1960’s with the release of revolutionary games like Spacewar, Space Travel, and Chase; as well as the invention of the UNIX operating system and a prototype of the light gun. Those 30 years may have seemed insignificant in the scope of gaming history, but it paved way for the electonic golden age… the arcade.

In 1972 the world’s first video game console, the Odyssey, was released by Magnavox. Though the Odyssey was not commercially successful, it was succeeded by the hugely anticipated system, the Atari, and its release game, Pong. As well as home consoles, coin-operated arcades were simultaneously being developed and installed in fish and chip shops all over the world. An extensive list of university developed games also began to catch the public eye; this, coupled with the Atari’s console success, and the development of millions of highly addictive arcade and PC games drove the world to the verge of a new medium – interactive entertainment. By the end of the 1970’s classic games like Pong, Space Invaders, Asteroids, Lunar Lander, and Pac-Man had etched their mark on the world, and the video game craze was off.

However, this new found strength was to be short lived. In the early 80’s the video game industry suffered an economic blow that rivaled the Great Depression of the 1930’s (...not really). It was christened, simply, "The Great Crash". There were many factors which brought about this sudden collapse and bankruptcy of the video game business during the year of 1983. They included the very aggressive marketing of home computers (especially the Commodore 64); a flood of poor titles based from hastily financed startups; and the media’s conclusion that (like Cabbage Patch Kids and Beanie Babies) electronic entertainment was just another fad, and that the age of video games was at an end. Sales dwindled; companies collapsed; and the video game industry fell from grace – everything seemed lost forever. But then--like a phoenix from the ashes of the forgotten medium--a new company arose … it was called Nintendo.

In 1985 the Nintendo Entertainment System (or NES) was released into the world. Armed with a large number of Nintendo-developed original titles and arcade games, such as Super Mario Bros. Donkey Kong and Kirby's Adventure, the NES was a hit in a limited market release. A second rival system quickly followed – the Sega Master System. Despite public disinterest of the gaming world both companies began to gather success in the marketplace and respect in the industry. Atari also attempted to release another console, the 7800. Though Atari eventually faded away, Nintendo and Sega had made great advancements in gaming technology, and begun to revive and re-invigorate the industry. Video games were back at last!

If the 60’s were the research, development, and creation of electronic gaming; the 70’s were its glorious rise to power in the form of the arcade; and 80’s were the fall, return, and revival of video games; then the 90’s were about the evolution of the technology and, more specifically, the consolidation of the industry. Although there were many attempts for other company’s to muscle in on this newly defined market, there were only two real contenders – Sega and Nintendo. The 90’s brought around the release of the Super Nintendo Entertainment System (SNES) and the equally powerful and beloved, Sega Genesis/Mega Drive. The titanic technical advancements, vicious marketing strategies, and huge cultural influences that emerged from the direct competition of these two companies become known [historically speaking] as the Fourth Console War. Video games were no longer confined to repetitive simulations, or isolated systems, they were now home consoles with titles that ranged beyond the spectrum of film and literature; adventure, action, war, shooting, platform, racing, combat, sport, and multi-player were all explored in some form. By the mid-90s, Sega had begun developing the Sega Saturn, a machine which was able to delve into the third-dimension of gaming.

In 1995, a fresh, ambitious new developer entered the gaming market – Sony. They released a 32-bit disc-based system which was able to generate 3D graphics. Despite having a weaker console, Nintendo still maintained dominance in the market. Sega’s new console (Saturn) was in direct competition with the PlayStation, and was eventually abandoned by gamers as the inferior console. It was around this time that Nintendo released their much anticipated 64-bit console – (appropriately) the Nintendo 64. Suddenly a new age of gaming had dawned upon the world, the age of the third dimension; and the Second Console War had begun: Nintendo vs. Sony.

The Fifth Console War was similar to its successor, in that it was fought through technological advancements and marketing skills. But unlike the first war, Nintendo was now fighting an incredibly wealthy and ambitious corporation. The Sony/Nintendo rivalry managed to churn out some of greatest and most important video games of the medium. These games included Super Mario 64, Dance Dance Revoltuion, GoldenEye 007, The Legend of Zelda: Ocarina of Time, and the Final Fantasy series. This era was marked by its experimentation of true 3D graphics and environments, a larely unexplored concept up until then. By the end of the millennium Sony had dethroned Nintendo (with the PlayStation outselling the Nintendo 64), and all but defeated the withered Sega.

The early 21st Century saw the beginning of the Sixth Console War. Sony had updated its console into a technically impressive (yet unimaginatively titled) PlayStation 2, and Nintendo had unveiled its fourth home console – the Nintendo GameCube. The intensely powerful Microsoft had also decided to dip its beak into the video game industry, with the release of the X-Box. Though Sega’s attempt to return to gaming (with their failed Dreamcast) was in vain, they now began developing games (although not exclusively) for their former rival Nintendo. Despite their attempts to retake control of the market, with third-party support and an update to discs, Nintendo simply could not compete with Sony or Microsoft. This era (which will have ended by the end of this year) produced some incredibly advanced and provoking titles; these include Super Smash Bros. Melee, Halo, Metroid Prime, and the Grand Theft Auto and Gran Turismo series.

I have really only explored the development of video game consoles, however, it may be of interest to note the gradual evolution of handheld gaming. Though there have been many portable gaming devices developed throughout history, it is Nintendo’s Game Boy that has lead the way and dominated the handheld market. The first installment was the original Game Boy, released in 1989. Simple and dull by today’s standards, the Nintendo Game Boy was leaps ahead of its time, and, packaged with Nintendo’s ultra-addictive game Tetris, was a groundbreaking success. Over the next decade Nintendo worked on both their home console and handheld range. The original Game Boy was eventually downsized to the Game Boy Pocket, and then upgraded to the Game Boy Colour. Several years later the Game Boy Advance was released (in conjunction with the GameCube), and then recently the Game Boy SP. As the device has evolved, so have its games. Titles like Tetris, Metroid II, and the Donkey Kong Land and Pokemon series have all earned their names in video game history. The handheld market is perhaps slower to advance, due mainly to the lack of competition and relative size of the device, but when you look back at the tiny black-and-white, pixilated screens of the original handhelds, and compare them to today’s 64-bit, crisp 3D visuals and sound, you cannot help but admire their progress. 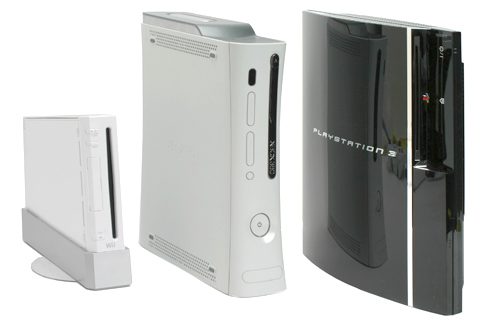 The future of video games is a prospect shrouded in mystery. The next year or so will see the launch of all three company’s (and perhaps a few more) new consoles – the Microsoft X-Box 360, the Sony PlayStation 3, and the Nintendo Revolution (or Wii). Having witnessed the technological miracles of the previous console war, it is hard to imagine what else can be achieved. What can we expect to see, not just in this generation, but over the decades to come? Will we see graphics so realistic that they are able emulate real life? Will we be able to eliminate the controller all together and manipulate games with our mind alone? Will virtual reality ever become available to everyday gamers?Only time will tell. One thing is for certain though; video games are not just a passing fad, they are here to stay. Like music, television, film, art, and literature they will continue to shape us as a culture and as a society. The human being will always yearn to explore and adventure beyond the realms of what is static and what is real, and, as history and technology have proven, there are no limits to the capabilities of the human mind and imagination. The video game war will rage on whether we pick a side or not. For it is a war fought, not over industry and trade, but to expand the dominion of the human thought and potential.