This scene takes place towards the end of the movie, when private detective Philip Marlowe and the daughter of his employer, Vivian Sternwood are reunited in the refuge of Mona Mars. It depicts the two characters peering though the blinds at the sight of an oncoming car, driven by hit-man Lang Canino, who has been ordered by mob-boss Eddie Mars to kill Marlowe.

The black-and-white image makes beautiful use of shadow and texture. The light flowing in from the window illuminates Marlowe and Vivian’s steely gaze, while drawing the rest of the room into darkness. This shift in texture as the car approaches, as well as the glint of Marlowe’s revolver indicates to the audience that a confrontation is drawing near. 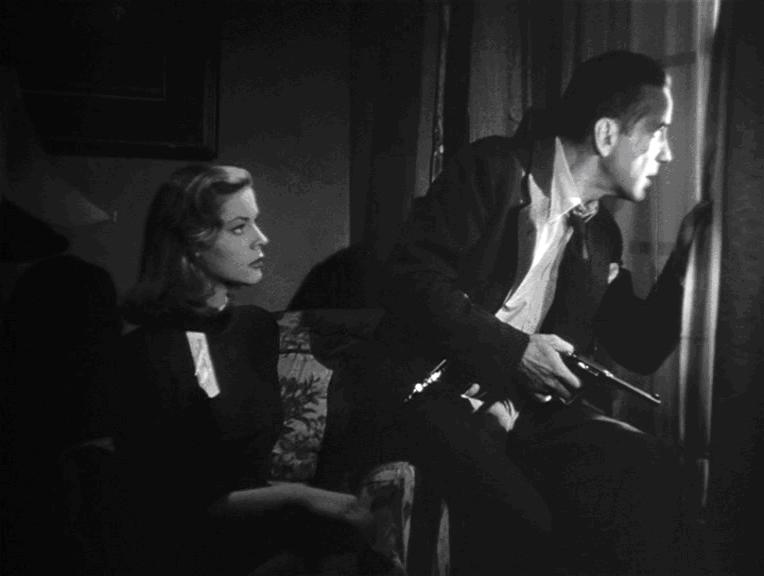 Even though Mars is the villain of the film, Canino is Marlowe’s most immediate threat. He is, in a way, his anti-thesis. Both men are cunning and resourceful, and both work for a higher power (Eddie Mars and General Sternwood, respectively), whose will is carried out by hiring others to do their dirty work. Recalling Marlowe’s literary allusions to medieval fantasy (“Knights had no meaning in this game. It wasn't a game for knights”;), we can take the analogy further, and argue that if Marlowe is the knight, and Mars is the evil overlord, then Canino is his nemesis.

[SPOILERS] As Canino gets out of the car and loads his gun, a look of pure menace printed across his visage, Marlowe asks Vivian (who has recently become involved with him as a love interest) to cause a distraction, so that they can get the drop on their aggressor. Vivian lets out a bloodcurdling scream, and Marlowe sneaks round behind Canino’s car. Vivian bursts out of the house, distraught over Marlowe’s apparent escape. Canino grabs her, but she pushes him away. Suddenly, Marlowe emerges from the shadows and shoots his enemy dead in the heart. Marlowe triumphs, but now it’s time to deal with Mars [/SPOILERS].