Although many of the classical writers believed that the Celts were barbarians, lacking in the refinements of civilization, this attitude is the product of cultural misrepresentation and considerable political bias. A more objective analysis of Celtic society suggests that they were just as civilized as the Romans and the Greeks, and in some cases, such as the equal treatment of women, more so.

A barbarian is a person belonging to a culture which has no form of writing, possesses little knowledge and exhibits un-evolved social skills. The term is especially used [perhaps unfairly] to refer to ancient European cultures outside of Rome and Greece. A barbarian is, as the classical writers have argued of the Celts, uncivilized. Civilizations are an advanced state of human society. A civilized society, such as the Greco-Roman Empire, demonstrates a high level of art, science and religion.

The main reason that the classical writers held this view was that because, at the time, the Celts were the enemies of their nation. The Celts and the Mediterranean people were at constant war with one another, and so the classical writers would have formed a natural bias against them. And even if they had not, they were expected to paint the Celts in a negative light by the ruler of their respective state. As well as this, most of the classical historians never lived among the Celts or studied their practices up close. The Celts performed some uncivilized practices, but they were far from barbaric. The Celts farmed the land and were master craftsman. They traded with other societies; lived under a system of class hierarchy; and even had an astrological calendar.

The historical perspective that the Celts “[lacked the] refinements of civilization” is clearly unfounded. While the Celts did practice ritual sacrifice (evidence found in the cult sites in Ancient Gaul; now France) and a head cult (as described in Irish Sagas such as “MacDatho’s Hound and Pig”) in accordance with their Pagan religion, they also possessed good economic and agricultural skills (Polybius describes how the Celts would harvest crops and grow cattle for food and trade).

In some ways the Celts were just as civilized as the Romans and Greeks, and sometimes more so. They both lived under a class system (i.e. peasants, soldiers, priests, royalty); they both traded goods with civilizations (often each other); they both farmed the land and were based in hill barracks (the hillforts raised over the sides of the Celtic divide demonstrated their social organization and increasing military defense tactics); and they both lived under a calendar. Where the Greeks and Romans advanced was in their centralized government and sophisticated military. On the other hand, the Celts treated their women as equal citizens (due to majority of goddesses in Pagan mythology), while the Romans and Greeks did not, and while the Celts would decapitate their enemies, the Romans would pit their own citizens against one another for entertainment (see: gladiators).

The Celts also possessed superior craftsmanship and workmanship abilities (see the fine details and geometric patterns of the artwork from the Hallstatt culture). Though the Romans were generally seen as the greater warriors, the Celts (despite underdeveloped combat strategies) lead many successful campaigns against them; even going so far as to sack Rome itself.

There were many reasons that the classical historians considered the Celts as barbarians. These include a lack of witness accounts (as the Celts were a much closed society and were hostile to foreigners), and a lack of knowledge about the Celts religious practices. The Pagan religion involved animal and sometimes human sacrifice and this horrified the Mediterranean’s, and, fearing what was different, they instinctively branded them as savage. The only real contact they had with the Celts was in battle, when the Celts were at their most fierce. Because the Mediterranean’s were at constant war with the Celts, a natural hatred was forged against their people.

Though the Celts were not as politically or militarily organized as the Roman or Greek empires, they were far from barbaric. They were a strong and proud civilization; rich in religion, skill, and culture. The unfair bias against them was generated by the classical historians – most of whom knew nothing of true Celtic life, and none of whom were Celts themselves. 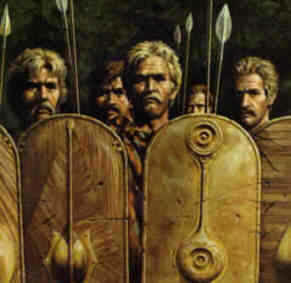