The film Rashomon (Kurosawa, 1950) challenges us to question the reliability of verbal narration and the assumption that what is seen must be believed. This essay will examine the question – are words or images more credible in Rashomon? We will begin by analyzing the visual and verbal narrative presented to the audience; before comparing and contrasting character perceptions, as well as the imagery and cinematography employed by the film.

Rashomon opens in a ruined temple, where a woodcutter and a Buddhist monk have taken shelter from a vicious thunder-storm. Along with a cynical passerby, they ponder a bewildering crime that has shaken their faith in men. The testimony at the trial, is recounted in flashbacks, along with four differing re-enactments of the violent incident itself. Certain facts in the case are undisputed – a bandit has stalked a traveling samurai and his wife through the forest, tied up the husband and raped the wife in his presence. The woodcutter stumbled across the aftermath of this event, by which point the samurai was dead; his good stolen. But how and why did the husband die? In turn, the movie gives the dramatized explanations of the arrogant bandit, the tearful widow and, through the use of a medium, the dead husband. Each of these contradictory accounts is “fundamentally a lie… coloured by the guilty motives of the teller” (Kroeber). All three are exposed by a fourth version, told by the woodcutter, who turns out to have been an eyewitness to the whole incident, but even he has something to hide, having taken the samurai’s valuable knife for himself (Kroeber).

What’s more significant than the literal contradictions in the testimony of the characters, are the moral contradictions. While the audience cannot denote who is objectively right, it is clear that all of the characters are “morally compromised” and have “slanted their testimony in an effort to conceal their [own] immorality” (Martinez). The audience is forced to the realization that, while they do not have enough evidence to decide who is right on a literal level, they almost always believe one character over the others on an emotional level. This realization requires the viewer to “admit that they too are morally compromised” and decide what is true based not on fact but on preconception and the need for self justification (Martinez)

A reverence for silent film and modern art can be seen in the film's minimalist sets. Kurosawa creates a very simple and natural mise-en-scene, opting to use real sound and lighting in order to create a much more subtle, layered portrait of life. He argued that “real sound multiplies the complexity of a film”, and that silent film carried a simplicity and a beauty that he wanted to restore to cinema (Kroeber). Accordingly, there are only three settings in the film. They are the Rashomon gate; the woods (or grove); and the courtyard, where the trial is held. The gate and the courtyard are very simply constructed and the woodland is real.

The cinematography in the film is used to create links between characters.  For example, in one sequence, there is a series of single close-ups of the bandit, then the wife, and then the husband, which then repeats to “emphasize the triangular relationship between them” (Kroeber). The shots of the wife and of the bandit are the same length and composition, when the bandit is barbarically crazy and the wife is hysterically crazy. The camera in Rashomon is frequently aimed directly into the sun. In the shots of the actors, Kurosawa used natural light, which creates the effect of light filtering through the branches, hitting the actors. This use of “dappled light” throughout the film, gives the characters and settings further ambiguity (Martinez). Unusually, the film uses sunlight to symbolize evil and sin in the film. The wife gives in to the bandit’s desires when the sunlight hits her.

The film Rashomon also makes heavy use of editing, with pieces of film from various angles, being spliced together quickly, in order to imply forcefulness to the action. The film contains over twice as many separate shots as the average film, but Kurasawa does so without drawing attention to the editing (Ritchie). The film also makes heavy use of symbolism. Filming the sun directly through the leaves of the trees “shows the light of truth becoming obscured” (Martinez). The gatehouse that we continually return to as the “home” location for the storytelling serves as a visual metaphor for a gateway into the story, and the fact that the three men at the gate gradually tear it down and burn it as the stories are told is a further comment on the nature of the truth of what they are telling.

Due to its emphasis on the subjectivity of truth and the uncertainty of factual accuracy, Rashomon can be read as an allegory for the atrocities committed by Japan during the 1930s and 40, and its defeat at the end of World War II. It also provides great insight into “the psychological discord that the Japanese culture was undergoing in the early part of the twentieth century” (Martinez). Japanese society was transforming from a traditional, religious-based society, into a newly adopted westernized culture, complete with industry, technology, and science that conflicted with the countries established philosophies. Kurasawa illustrates this theme in the opening scenes of the film, where he shows the once proud and majestic Rashomon Gate, “a religious monument… abandoned and in ruins” (Martinez). As we enter the story, it is raining, (symbolic of transformation or rebirth) and we are told that the city of Kyoto has undergone a series of calamities, including earthquakes, fires and tornadoes, which have left it in a state of decline. The horrendous act of violence that the film investigates may represent the acts of violence committed by Japan itself, during it invasion of China and Manchuria. The fact that each person who recounts the event, attempts to justify their actions and paint themselves in a righteous light, also reflects the nations struggle to come to grips with its moral identity. The final scene of the film, however, is ultimately one of hope. The woodcutter, hoping to atone for his sins, takes the abandoned child—the new Japan—under his care. The storm-clouds begin to part, and sunlight is allowed to wash over the battered landscape (Ritchie).

The film poses a strange, somewhat unsettling question, to its viewer – can the truth ever be known? Can an objective realization of events ever come to light, or are echoes of the truth, twisted and manipulated people’s own self-interests, the best we can ever hope for. If a single event in time cannot be fully understood, even with four witnesses to recount it, then do we really know anything about the world? Or are our perceptions false and self-serving? Kurosawa shows us that neither words nor images can be trusted within this context, and what was once a fascinating concept, executed immaculately, is now a depressing account of the human mind. 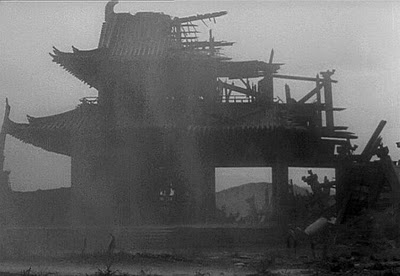