War is a powerful thing to experience. On one hand it shows us the aggression and raw brutality of mankind, but on the other it brings out the true resilience of the human spirit. In the film Europa Europa we follow the journey of Solomon Perel, a Jewish teenager from Peine, as he desperately tries to escape from the terrors of World War II, not only on the battlefield but in his own beliefs as a person. I think we can all identify with Solomon in some way, though never on such a large scale. We have all had to face domestic hardships or social persecution somewhere throughout our lives. Everyone needs to belong; to fit in, but here, in Germany, Solomon is forced to hide his identity to survive. Though we may have lied about our ethics or beliefs to feel accepted at some time or another, we were always faced with a choice. If Solomon was found out to be a Jew, it was all over.

When Solomon is attacked on Krystallnacht, and his sister Bertha killed, it represented a public form of societal discrimination that some of us do have to face. And when he and his family are forced to flee to Lodz, I think it related to the changes many of us will go through sometime in our lives. When Solomon and his older brother Isaak are separated in the Polish river, Solomon is rescued by a Russian soldier and taken to Grodno, a Russian orphanage on the other side. Here Solomon is introduced to Communism, a form of economic and social government that he begins to admire and respect. However, during his stay he still remains an open Jew. Once again though, Solomon is forced to flee from the orphanage during a German aerial attack. He is picked up by the Germans and taken to the Wehrmarcht. This is where he decides to desert his Jewish heritage and join the Nazi’s – his enemy.

Throughout the film Solomon is constantly forced to hide his beliefs, and redefine his morals. We see him relentlessly harassed by his own conscience as he slips more and more into a fascist train of thought, feeling guilty because of the loss of his family, and the forsaking of his religion. Nevertheless, in the face of great misfortune, humanity has shown infinite courage. And Solomon proves to us the resilience of the human spirit, until at last, when the armies of Hitler are defeated, and the horrors of the Nazi regime are ended, Solomon is left in peace. He is reunited with his brother Isaak and free to live as a Jew once more. And Solomon still lives, to this day, a Jew, and a free man.

Another aspect that this film looks at is the futility of war, and its cost to human life. War is hardly ever justified, and World War II is no exception. The countless deaths of soldiers and civilians alike were simply pointless, but the true tragedy of WWII was the Holocaust – the systematic execution of some 6 million Jews, in camps, torture chambers, and on the streets. Such cruel and terrible hatred for another race, such as the hatred the Nazi’s showed towards the Jews, is simply disgusting. But even worse was the fact that no one did anything to stop it, this was the true terror of WWII. As Edmund Burke once said, "All that is necessary for the triumph of evil, is that good men do nothing."

Through the eyes of Solomon Perel we see a war-torn Europe on the verge of destruction, caused by the greed and cruelty of mankind. But I think that the biggest message Europa Europa is trying to get across is not the senselessness of war, or the ultimate fall of Europe. It shows us that life goes on, and that humanity will always endure. 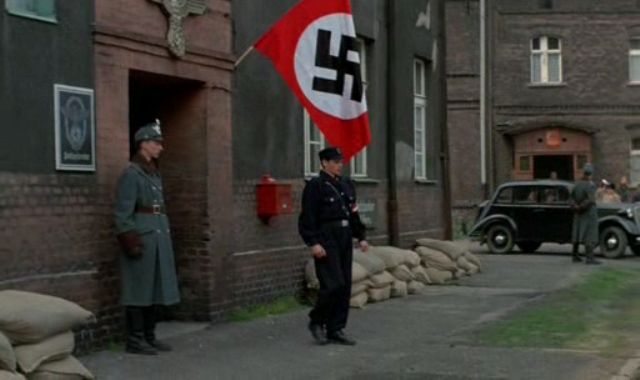