The 1955 Australian film Jedda examines the plight of a young Aboriginal woman as she wrestles between her place in “civilised” colonial Australia and the traditional heritage of her people. The story is told from the perspective of the indigenous people, and the audience is encouraged to sympathise with Jedda’s struggle for identity. This was quite a radical take on cinema during the time of its release, but what makes the film especially interesting is how much it reveals about the attitudes of 1950’s Australian society; its cultural prejudices and its blatant discrimination towards the Aboriginal population.

The central theme of the film is Jedda’s internal struggle between her cultural upbringing and her indigenous ancestry. She is torn between these two conflicting instincts; symbolising Australia’s own broader divergence between its ancient indigenous customs and the newly introduced Western ideologies. Jedda is raised by a white couple (Sarah and Doug) from birth, and is not only taught to obey all the refinements of Western “civilisation”, but is segregated from the rest of the Aboriginal workers on the property, lest she “revert back to her savage nature” (Paul Byrnes). However, despite her successful assimilation into White society, the audience is still reminded of her constant longing to connect with her people. As a child, Jedda is seen playing games with the other Aboriginal children, but is quickly escorted back into the house by her mother. Director Charles Chauvel may be trying to say something here, about the “stolen generation” of Aboriginal children separated from their own people and raised by white Australian’s in an attempt to weed out what they saw as barbaric tendencies, and assimilate them into Christian society.

As an adult, Jedda is seen one day, sitting by an open window, gazing out dreamily. Her adoptive mother eventually comes to her side. Jedda tells of her desire to go “walkabout” with the rest of the tribe, to which the mother scolds her; warning her against the primitive ways of the Aborigines, and calling them “monkeys”. To take her mind off this she urges Jedda to play her piano. Jedda begins to play a composition from Mozart (a traditional figurehead of European high culture); her gaze focuses on the Indigenous works of art on the wall, Indigenous music is heard and her playing becomes more frenzied (Romaine Moreton). After collapsing angrily on the keys, she recommences the piece, this time playing a more “melancholy variation on the theme” (Byrnes). By the end of the scene, Jedda seems in a kind of trance, the music has been joined by Indigenous chant and clap-sticks and her playing has become more violent and jarring (Moreton). This sequence, in which music is used to communicate Jedda’s inner turmoil, perfectly captures the sentiment of diverging loyalties and conflicting roles in regards to one’s culture. This is the film’s most driving message and is delivered brilliantly through Jedda’s character. The poster taglines for the film were “the drama of a girl torn between civilization and the call of her native instincts” and “the magic of the native mating call was stronger than the habits of civilisation”. These, again, imply a sense of superiority held over indigenous culture by white Australia.

If Jedda represents the struggle between black and white Australia, and her half-caste friend Joe is the assimilated, civilised native, then the character Marbuck represents the wild, untameable indigenous warrior. The film presents him as a dangerous, seductive force of nature; a full-blooded Aboriginal, untinged by Western colonisation and European ideology. “The passion that Marbuck arouses in Jedda is very real and highly sexual and it’s seen mostly from her point of view” (Paul Calina). Jedda is drawn to him out of both sexual desire and spiritual longing to connect with her ancestry. Aboriginal scholar Marcia Langton describes Marbuck as “an outlaw” who refuses to “submit to civilization”. She argues that if the assimilated half-caste Joe is the “emasculated native” and the “black buffoon of a thousand movies”, then “Marbuck’s equivalent is King Kong”. Marbuk is presented as “socially unacceptable and inassimilable”, which, to the white world of the film, tends to reinforce Doug’s stance that the Aborigines are instinctively savage and all traces of their traditional barbarism must be wiped out (Karen Jennings).

Marbuck is introduced to the audience as a “problematic outcast” (Paul Kalina). He is ordered to put on trousers but never does. He makes an entrance to the station, and is told almost immediately to leave and camp away from everyone else. RMIT lecturer Peter Kemp describes “his exit [as] a marvelous entrance and we see about four different shots of his beautiful body.” Kemp claims that Marbuck is “as iconic a presence in Australian cinema as Chips Rafferty, Peter Finch or whoever you'd like to name of that era”. Although ultimately antagonizing presence in the film, Marbuck is more layed than your average villain. He is more wild and enigmatic than evil, and his seductive nature stirs the audience as much as it does Jedda.

There have been many different interpretations on how Jedda has depicted its Aboriginal characters, and what this says about attitudes towards the indigenous population of this period. Professor of Media and Communications, Stuart Cunningham describes the film as “radical” in its use of an Aboriginal perspective and its emphasis on “cross-cultural understanding”. However, he also argues that it is “not necessarily progressive”, because it seems to correlate this understanding with an “assimilation to white culture”. Langton rejects the film as racist because it depicts Aborigines as “uncivilized” and Marbuk as a “primitive who must be destroyed”. Jennings tends to agree with this point, but also contends that the film’s representation of indigenous people is at least somewhat “multi-dimensional”.

Jedda and the depiction of its characters reveal a lot about Australia’s own racial prejudices and cultural ignorance during the middle of the 20th century. This may reflect the views of Chauvel and his wife (who co-wrote the film), or perhaps it was deliberately implemented as a critique on the periods social outlook. Langton writes that, “Chauvel’s Jedda expresses all those ambiguous emotions, fears and false theories which revolve in Western thought around the spectre of the ‘primitive’. It rewrites Australian history so that the black rebel against white colonial rule is a rebel against the laws of his own society.” However, Paul Brynes rebuts this point of view, claiming that Jedda is “the first Australian film to take the emotional lives of Aboriginal people seriously” and that “[Chauvel] had an unusual degree of sympathy for, and interest in, Aboriginal culture” which should be applauded.

The two different views of assimilation, which were the prevailing government policies of the time, are explored in Jedda. Her adoptive mother, Sarah, has raised Jedda to be a white girl and believes she is now “no more like [her tribe] than night is to day”. The station boss, Doug, however, believes that Jedda is only “tamed” on the outside and that efforts to “civilize” or assimilate her into white society will ultimately fail (Moreton).

Their conversation reveals the language of racism, in common use at the time, regarding Australia’s Indigenous people. Sarah’s motivation to deter Jedda’s plans is clear; she refers to the tribe as “those naked monkeys” who “eat grubs and goannas and all sorts of dreadful things”. Sarah’s stance is “assimilationist and interventionist” while Doug accepts innate cultural differences, but regards full-blooded Aborigines as inherently savage. These two viewpoints represent the common perspectives of many Australians during this time.

Jedda is an important movie in the history of Australian cinema. Not only was it the first of the nation’s motion picture to be filmed in colour, it was also the first time Aborigines were introduced as central to the plot. The audience is even asked to sympathize with them and their plight. 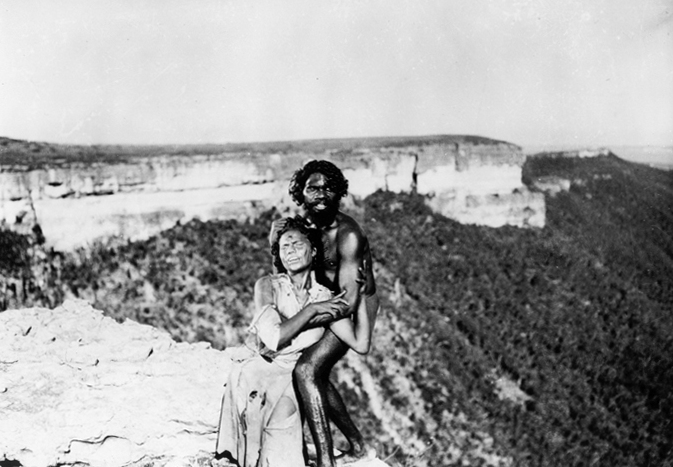