My name is William Somerset. I am a senior homicide detective who investigates a bizarre series of ritual murders in the crime film Se7en. I am one week away from retirement when I am partnered with the fresh-faced, rookie cop, David Mills. Mills and I attempt to track down the serial killer, known as John Doe, who chooses his victims in accordance with the Seven Deadly Sins.

The opening sequence of the movie introduces me as the central protagonist, and also shows the audience what I do for a living and what I am like as a person. As I get dressed and ready for work, I am shown to be very meticulous and exact, as all of my things are lined up neatly on my desk, in the order that I pick them up. This calm demeanor is contrasted with the sounds of police sirens and general anarchism trembling outside the walls of my apartment. The next shot of the film cuts to me arriving at a crime scene. I am seen strolling slowly throughout the room, with my hands in my pockets, indicating to the audience that being this close to the scene of a murder is not uncommon for me. The frantic, twisted nature of the crime (quite literally, painted on the walls), combined with the sounds of people shouting, cars moving; dogs barking and alarms going off, again contrast against my relaxed nature (my movements throughout this entire scene are very slow and thoughtful), but also hint at my growing apathy. However, the fact that I ask “whether the kid saw it” indicates to the audience my caring personality; a question met with apathy and distain by the other investigating policeman. This scene also serves to introduce my new partner, detective David Mills. Since a big star has been used for Mills’ character (Brad Pitt), and the fact that I have already been established as the film’s central character early on, the audience knows that much of the story will revolve around the relationship between these two characters.

The entire look and feel of Se7en’s opening scene is very rough and raw. This is to keep the tension high and the mood dark. It also links the film with dark ideas, such as murder and serial killers. There is no music used, other than the hectic background effects of the city in which the film is set, and the edits are fairly fast, in order to keep the pace and tension as high as possible. It introduces myself, as a man leading a simple life, which is taken up mostly by my work as a homicide detective. It also introduces my new partner, detective Mills, who is eager to work (he literally runs up the stairs of the crime scene) and wants to “change the world”. A very important aspect of this scene is the use of rain, which is a prominent feature of the film, right up until its climax. It is very loud and obscures much of the cities surrounding landscape. It also contributes to the cold, hard tone of the events that are taking place. The opening credits of the film are also very crude and disjointed, and symbolize the mindset and nature of its titular serial killer. The whole sequence employs a form of editing called “montage editing”, in which a series of short cuts are spliced together. The images presented to the audience include fingerprints, diaries, forensic equipment, bodies, blood, and handwriting; with a very sinister and scratchy urban rock score played over the top of it. This well-devised piece of music is also extremely disjointed and works brilliantly with the disturbing images we are being presented with. The entire sequence perfectly exemplifies the feel of Se7en as being an action-thriller, laced with elements of the horror genre.

The main storyline of Se7en begins when I arrive at a murder scene, in which a morbidly obese man has been tortured to death through force-feeding. Forensics indicates that the victim died after the killer gave him a sharp kick to the stomach, spilling his intestines. Afterwards, my partner, David Mills, investigates the death of high-class defense attorney, who was bled to death through forced self-mutilation. The words “Gluttony” and “Greed” are later found at each respective crime scene; written by the killer in grease and blood. As I explain to my captain “you don’t risk the time it takes to do this, unless the act itself has meaning”, and it soon becomes apparent to both of us that we are dealing with a serial killer. The symbolic nature of these two crimes indicates that they have been committed by the same perpetrator and that his modus operandi of torturing victims in accordance with the Seven Deadly Sins of Roman Catholicism means that “this is only the beginning” and “we can expect five more of these”. Mills and I each seek to investigate the crime scene in our own way. Mills is more straightforward. He looks at the facts—the case file; photographs, forensic reports, witness testimonies, etc.—and tries to sift through them in order to pick up clues. I, on the other hand, try to understand the broader nature of the crime, by visiting the library and studying literature related to the Seven Deadly Sins. These two methods of detection are compared through a rather surreal montage, set under a score of classical music. I again lament the growing sense of apathy I feel is pervading society when addressing the public library security guards: “I’ll never understand; all these books; a world of knowledge at your fingertips. What do you do? Play poker all night.” That night, before falling asleep, I set a metronome by my bed. This, again, indicates my desire to feel a sense of order and balance within a chaotic and hostile environment.

My relationship with detective Mills is one of the key focus’ of Se7en. We are initially repelled by one another. He is an eager, young cop who is full of optimism about the difference he can make as an individual. However, Mills is also inexperienced, and more than a little naïve, when dealing with the kind of moral corruption and collective apathy for justice that exists within a large city like this. I, on the other hand, have seen too much, and have become weary of trying. I am tired of waging a dying battle against crime. I don’t feel that I am making a difference anymore; “I don’t understand this city”, and I am ready to retire. Our dramatically opposing points of view bring us into conflict early on in the film, but as we spend time with one another, we come to sympathise without each others points of view, though never fully embracing them (Mills: “I don’t agree with you. I do not. I can’t. Thank you though.”).Our connection is most readily embraced over Mills’ wife Tracy, who is able to break down the barriers of our professions and get us to relate to one another as people (Tracy: “William, this is David. David; William.”). The fact that, by the end of the film, we address each other by our first name symbolizes our growth from partners to friends. I am also shown to be old comrades with my captain, who has also been hardened by the cities growing sense of hostility. Other than that, however, I am presented as a rather lonesome and solitary individual. I reveal to Mills’ wife, Tracy, that I was once engaged to a women who fell pregnant, and that I forced her to get rid of it in order to spare it the pain of growing up in a city as dangerous and morally corrupt as this one.

There is a strong thematic and textual connection between my character and the character of John Doe. We are essentially mirrored images of the same embodied views and traits. We are both, for example, scholarly, and have an appreciation for libraries and great literature. More importantly, however, we both share a similar disgust for the sinful city in which we live. Doe and I recognize the ugliness of our world, and try to change it in our own way (Doe kills, I arrest). This strange relationship is best viewed in our exchanges with the younger detective Mills. In trying to justify my reasons for retirement I tell Mills that “I just don’t think I can live in a world that embraces and nurtures apathy as if it were a virtue”; while Doe, in rationalizing his murderous crusade argues that “we see a deadly sin on every street corner, in every home, and we tolerate it”. John Doe and I are sickened by the concept that so many evil acts are committed everyday, and everyone just stands by and does nothing. However, redemption is finally attained by my character in the final scene of the film; the last line of Se7en, spoken by myself is “Ernest Hemmingway once wrote: ‘The world is a fine place, and worth fighting for’.”—and Somerset’s resolve to keep fighting is embodied—“I agree with the second part.” 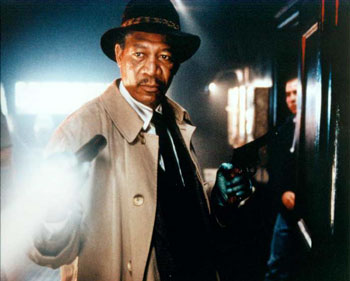