The Tragedy of Hamlet (lit essay)

I am Hamlet, Prince of Denmark, and the story of my life is not a happy one to recount. It is a tale of murder and deception; a legend of madness, incest and brutal revenge. It is indeed a tragedy to behold. When the story of my life was first performed some 400 years ago I was praised as a hero of the stage and a champion of Denmark; a valiant man whose spirit was not crushed by the treachery of his uncle, or the deception of his subjects, or the torment of his own heart. I was seen as a lord amoung men; who avenged his father and saved Denmark from the hands of the criminal and the corrupt. In the words of Ophelia, I was “the glass of fashion and the mould of form/the observed of all observers (3.1.147–

”. They would of course have disregarded my madness, my delay and my intellectuality as mere tools in crafting my revenge against Claudius.

However, after Shakespeare’s time, literary scholars began to focus more on my inner motivations and psyche. The nature of my character was studied in terms of a tragic hero, rather than a classical one. That is, a brave and heroic person who suffers from a single flaw in their disposition or character, and of course it is this very flaw that leads to their downfall. The "fatal flaw," they call it. My flaw, many have argued, was my indecisiveness; my inability to act. Most of my role in the play is spent questioning or scrutinizing my situation. My “to be, or not to be (3.1.56)” soliloquy is the perfect example of this. At first it is whether Claudius murdered my father; next it is how to prove it; then it is how to catch him; and finally it is what to punish him with. And even then I could not go through with it for fear that my revenge would be incomplete. Actor Laurence Olivier would later refer to me as “a man who could not make up his mind”, and perhaps justly so. Because of this, my character would often be contrasted with my Norwegian counterpart, Fortinbras, a man who did not hesitate to act; a man who had the will to raise an entire army against Denmark for a tiny patch of land. Yet I could not even avenge my own father’s death. This theory of indecision is certainly plausible, but keen observers of the play will note that it was in fact my spontaneity in stabbing Polonius that spurred Laertes on to poison me, rather than my delay in killing Claudius.

Critics of the following era really began to stress “[my] madness, [my] weakness, [and my] intellectuality”. I was no longer a character in a play; I was now a play within a character. Focus was now being placed on my individual psychology, rather than merely my role in the play. My philosophizing over life and death – or, to be more specific, the meaningless of life (“the whips and scorns of time” [3.1.70]) and the inevitability of death (“the dust is earth, of earth/we make loam” [5.1.177-8]) – became widely discussed. Queries over my supposed madness were also being talked about. Up until that point my madness had always been seen as a mere red herring to shield my true intentions from Claudius and his agents, but aspects of my personality were now being being called into question; in particular, my melancholy, and by deep bouts of depression. Some have suggested that I may have suffered from a psychological mood disorder, such as bi-polar or even schizophrenia. This would explain my erratic mood swings and paranoia. Much of my hatred towards Claudius stemmed from the fact that he was my mother’s lover. In this way I saw him not just as my political enemy, but as a rival for my mother’s affection. Freudian psychology suggests that I suffered from a condition known as the Oedipus complex. This condition is based on the idea of a boy’s physical and emotional attraction to his own mother. Critics argue that this theory is supported by my seemingly obsessive preoccupation with my mother’s “incestuous” relationship with Claudius.

The interpretation of my character in The Tragedy of Hamlet has evolved over time. At first I was “a brave and heroic man, a sentimental hero”, and then I was a tragic hero – a man noble in purpose, but indecisive in practice. Next I was a philosopher, pondering the nature of existence and the meaning of life; and finally an enigma; a dark anarchist, teetering on the edge of insanity.

As the twentieth century progressed, however, questions were raised over the morality of my character. The play Rosencrantz and Guildenstern are Dead diverges somewhat from displaying the valiant, sympathetic Hamlet that we are all used to, and presents a more cunning and manipulative Prince of Denmark. Through Rosencrantz and Guildenstern’s eyes we witness a different side of Hamlet. We see him from the perspective of a commoner; of working class men, and because of this we do not sympathize with his situation, because (1) he is no longer the protagonist; (2) he lives a more privileged lifestyle; and (3) he is not portrayed as a victim. Most of the scenes in Stoppard’s play depict Hamlet in an unflattering light – chasing Ophelia around the palace; making fun of Polonius; playing mind games with Rosencrantz and Guildenstern; plotting to kill Claudius; and finally deciding the awful fate of the our innocent protagonists. Through their eyes I seem immature, lustful, disrespectful, deranged, deceptive, manipulative, and remorseless. In the words of Guildenstern, “I hardly knew him. He’s changed (pg.37)”. Moreover, all of my dialogue in Rosencrantz and Guildenstern are Dead is actually taken from the original play. It’s exactly the same. So this side of my persona was always visible, just never highlighted. Besides these moments, a modern day examination of the play reveals other some very unappealing sides to Hamlet. For example, he is very bitter and hateful towards his mother and to Ophelia. The line “frailty, thy name is woman (1.2.146)” demonstrates very misogynistic feelings. This, combined with my deceptive demeanor and lack of conscience, summons up an almost sociopathic portrait of a man.

Which brings us to the final interpretation of my character – “Hamlet the Rogue” or “Hamlet the Villain”. Within the literary structure of Rosencrantz and Guildenstern are Dead I represent the direct opponent; the enemy of these two good-natured servants of Denmark. Though I claim to be their friend, I betray Rosencrantz and Guildenstern; I deceive and manipulate the two subjects for my own amusement, and in the end it is I who send them off to be executed. I had two of my oldest and dearest friends killed for getting involved in something they had no control over. And did I feel pity or remorse for their plight; did I spare one line of dialogue to lament their deaths? No. When questioned about my decision I replied merely, “they are not near my conscience (5.2.58)”; as if my life was some how worth more than theirs. Indeed, in the words of Horatio, “why, what a king is this (5.2.63)”. Even in the context of my own play, the ethics and morality of my motivations must be called into question. I am deceptive and manipulative towards my subjects; disrespectful and obscene towards my elders; and vengeful towards my own King. Most audiences sympathize with my murderous ambition because they see it as simply just for Claudius to die, but it is important to recognize the difference between justice and revenge. As much as I wanted to avenge my father, I also wanted to claim the throne for myself, and to destroy my mother’s lover. Lust for power; incestuous desire; murderous rage; and “vaulting ambition” hardly sound like the characteristics of a hero, if anything they are more like the vices of a villain. At one point in the play I even begin to slip into an almost demonic mindset, uttering the words, “hell itself breathes out/contagion to this world. Now could I drink hot blood”. My flirtation with the designs of evil and my denouncement of God and religion in favor of an existentialist belief definitely supports this interpretation.

So then, what is the real tragedy? It is difficult to single out one atrocity from these events that stands out above the rest; a fact which, in itself, is quite tragic. Early audiences of the play would have recognized the tragedy in mere dramatic terms – the murder of Old Hamlet; the decay and destruction of Denmark; the death of the protagonist. Scholars after Shakespeare’s time would have focused more on my faults and failings as a character, rather than the broader play. My deep depression; my brooding madness; my demented psyche; my tortured soul were all studied as contributing elements of the greater tragedy. From the point of view of Rosencrantz and Guildenstern I think the tragedy would have been either that they had no control over their destiny and were doomed from the start; or that they were not explained anything and were used as pawns by more powerful men. Perhaps the tragedy could take on a more existential tone, meaning that it was not the deaths that were tragic, but the pointless, meaningless, painful stretch of life that preceded it … for all three of us. Perhaps, but I don’t think so.

I think the real tragedy here is that we are all already in a state of Purgatory. I, Rosencrantz, Guildenstern, and many other characters in the play have become utterly lost and alone because of these wretched turn of events. The fierce power struggle initiated by Claudius forced everyone into a state of fear. His usurpation of the throne caused all the subjects of Denmark to withdraw behind a mask of deception. For Rosencrantz and Guildenstern it was the loyal and trustful servants of the King; for my mother it was the loving and faithful wife of Claudius; and for me it was the depressed and raving mad Prince of Denmark. All of these identities were used to cloak our real motivations and intentions; to hide our fear, or our seclusion, or our ambition. The tragedy is therefore that we were unable to shake these masks from ourselves. We pretended to be these people for so long that it eventually became who we were, and then even when the source of our fear was eliminated we were left trapped between ourselves and our masks – neither one, nor the other; left in utter solitude and doubt over our fate. Hence, we are all trapped in a state of psychological Purgatory for deceiving ourselves. All save Horatio, who despite everything that happened remained loyal to his real self, and claimed sole salvation amoung the damned. 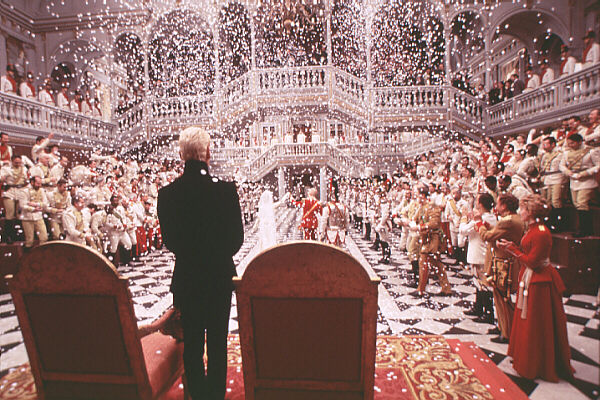