Return to Paradise raises several questions that challenge human ethics and morality. The ultimate question the film focuses on is "would you forfeit three years of your life to save your friend?" This is the basic premise of the story. Two years after a wild vacation of smoking hash and having sex in Malaysia, John 'Sheriff' Volgecherev and Tony Croft are confronted by lawyer Beth Eastern, who explains to them that their good-natured, tree-hugging friend Lewis McBride has been arrested for drug trafficking (due to a large stash of marijuana left in Lewis’ house by Sheriff and Tony) and has spent the last two years of his life in maximum security prison. She then explains to them that in eight days he will be executed… unless they return to the country to share the punishment – six years of prison if one returns, three if both return. This disturbing question is the driving power of the film, and forces both characters to look deep within their own conscience. The film also asks us whether capital punishment is indeed inhumane; does one man have the right to sentence another to die. It also looks at the evils inherent in an intrusive and dangerously opinionated media.

Sheriff seems to be a cool and capable man when we are first introduced to him. He lives in L.A., drives a limousine as a profession, and offers inside political information to a city newspaper journalist. He seems to have a firm grip on reality and his place in the world, but when Beth confronts him about Lewis’ situation, his whole life begins to spiral, and his true shallowness, and at times cowardice, begins to emerge. For the eight days before the execution of his friends he undergoes a surreal emotional and spiritual transformation, and begins to ask himself what kind of main he truly is. In the end Sheriff decides to accept his fate. He comes to the conclusion that his time in prison should be spent for himself, rather than on Lewis’ survival. Obviously, it is Lewis who he comes back for, but it is his own guilt that makes him stay. Lewis is still executed, but we are left with the impression that Sheriff has at last found peace within his heart.

Tony is married and works as an architect. When Beth confronts him, like Sheriff, he is deeply disturbed by the decision he will have to make, and does not know what to do. He agrees to return to Malaysia, but only if Sheriff returns with him (decreasing the sentence). Sheriff remains resistant to the idea, and so Tony, against his wife’s will, courageously decides to accept the full six years to save Lewis’ life. After much soul-searching Sheriff eventually accepts his share of the responsibility, and so the three fly to Malaysia two days before the execution. However, after Beth is revealed to be Lewis’ sister, Tony freaks out and flees the country, leaving Sheriff and Lewis to suffer. Although Lewis originally seemed to be the braver one, his true feelings are revealed to us towards the end. The fact that he left Lewis to die based on the fact that Beth was his sister show that he may have never wanted to go back, and that he was just waiting for an excuse to escape. Tony would probably never have survived prison. He had a good heart, but a weak will, and his decision will burden him for the rest of his life.

Beth is the sister and lawyer of Lewis McBride. Through the love of her brother and her skill as a lawyer Beth proceeds persistently and ruthlessly to keep her brother off death row. She wins Tony over at first, and then tries desperately to get Sheriff to join as well – using guilt, logic, money, and even sex to shift his mind. Through her untiring determination she gets both Tony and Sheriff to return for their friend. The ultimate tragedy of this film is that despite all of her efforts Lewis is still hanged. This is due to a ruthless and heartless newspaper journalist and her ill opinions of the Malaysian judicial system. By the end of the film Beth has fallen in love with Sheriff and vows to stay in Malaysia until he is free.

When Sheriff was faced with the harrowing possibility of prison in a third world country, he sought council from his emotionally distant father, who told him to go to prison and suffer the consequences of his actions. Tony conversed with his wife on the idea, and Beth relied on her own instincts to do what she thought was right. Initially, and for a majority of the film, Sheriff’s answer was no. This was mostly because of fear and the unknown of prison. After discussing it with his wife Tony agrees to the three-year sentence, and then after Sheriff declines, decides on his own to take the full six years in order to save his friend. Beth decides to continually pursue both men, despite the fact that Tony has already agreed. She does this to lessen the sentence for either man, as six years in prison may kill them anyway. Sheriff’s decision was influenced by no one but himself. His father, Beth, Tony and Tony’s wife all insisted that he accept the sentence, but out of cowardice he thought only of his safety and freedom, and declined. Tony’s decision came initially out of discussion with his wife (three years), but was eventually persuaded through guilt to accept the full sentence. Beth came to her decision through love of her brother, but also respect and compassion for the two men who would have to suffer for Lewis’ life.

In the end, out of guilt of his friend’s position, and respect for himself, Sheriff decided to return for Lewis. Tony, however, after discovering Beth’s true identity fled the country out of fear. Beth continued ceaselessly to defend her brother. Sheriff was imprisoned for an undetermined amount of time, but with a clear conscience. Tony fled back to the States, and will most likely live the rest of his life in shame. And Beth, despite her efforts, lost the case and saw her brother sentenced to death. Although this film certainly holds no happy ending, the bond between Sheriff and Beth is now unbreakable, and she has agreed to wait for his freedom. 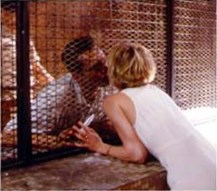