Since ancient times, Hell has been described as an evil and unholy place. As children we are brought up to believe that Hell is where the Devil lives, and if we are bad we will be banished there, after death. But in Tomorrow, When the War Began, Hell is the only safe place left.

Hell, as it is described in the book, is a very isolated, mysterious place that exists deep in the valleys of Mount Martin, at the bottom of Satan’s Steps. Ellie and her friends first venture there at the start of the book, and find that it is actually a beautiful, almost spiritual, place. And the fact that Hell shelters them from "the enemy" during the invasion indicates to the reader that it is also a refuge.

Our views of good and evil are challenged when the main characters return home to find their society in ruin – their homes are empty; their friends and family captured; and their town under foreign control. Their reality had ironically become damned. So this is how John Marsden confronts what we have believed our whole life, "Society" is no longer stable and structured, it is frightening and surreal; and "Hell" is no longer a place of torment, but of safety and refuge.

In this new society the rules have changed, law and order is now overshadowed by "survival of the fittest." After they return to Wirrawee, Ellie and her friends are pursued by the enemy. They have no choice but to fight back. They set up an explosive and kill two soldiers. In the old society manslaughter would be considered a monstrous act, but in wartime the rules of civilisation do not apply; now there is only friend and foe.

Some of the characters, more than others, are forced to adapt to this new world – Homer is proven to be a firm and commanding leader, as opposed to his previous immature, obnoxious personality; Robyn, who was once shy and quiet, develops a strong will; Lee, a distant teenager who keeps mostly to himself, is seen in a new light as someone intelligent and resourceful; and Fiona, a wealthy, delicate and gentle girl becomes hardened by wartime. But it is Ellie who transforms the most, after they return to Hell to hide out; Ellie reflects on the vast changes that she and her friends have had to deal with.

In the end she comes to the conclusion that her world has changed and cannot go back to the way it was, and that all she can rely on now is her friends and her instincts. She has adopted the law of nature - “survival of the fittest." For there is no evil in nature; "evil is a human invention." 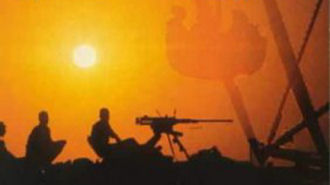