So I got the Metroid Prime Trilogy for Christmas last year. I beat Prime 1 (one of my fave games of all time) in about 7 days, with 100% scans/items). And then moved on with great anticipation to Echoes (which I had never played). Sadly though, I didn't find it nearly as engaging an experience. It took me almost a month of playing bits and pieces of it to complete the first level (Agon Wastes). I found the environments dull and claustrophobic (a far cry from the lush terrain and wide open spaces of Prime 1); the map confusing; and the spider-web type menus very frustrating (especially since I wanted to get 100% scans). I couldn't understand why I had to collect ammo, or retread the same areas in Dark mode, running from bubble to bubble like an idiot. I just wasn't having fun with it, but didn't want to skip straight to Corruption (which I had beaten back in '07). So after finally arriving at the second level (Torvus Bog). I saved it, shelved it, and moved on to other game like Red Steel 2, Monster Hunter Tri and Super Mario Galaxy 2. 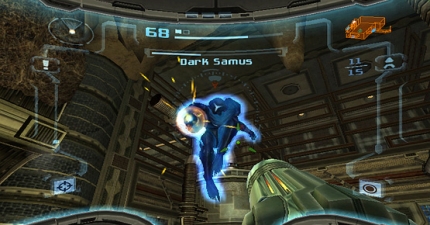 A couple of weeks ago, however, I decided to give Echoes another go. And lo and behold... I loved it! Suddenly everything started to come together. I started noticing the incredible detail Retro had poured into this game; the stunning architectural design of the environments, as well as how everything in the game was so perfectly connected. The music got better; the enemies become more unique; and I started getting new gadgets like the seeker missile launcher and gravity boost (and later the Echo Visor and Screw Attck), rather than just rounding up all the inventory I collected in the first game. The Dark Suit also made Dark Aethena much more bearable. Retro had unfortunately picked the two worst gaming environments to launch Echoes - a desert level and a water level. But they made up for it with the third and final level (possibly my favourite stage in the entire trilogy) - Sanctuary Fortress. An enormous, glistening, mechanical city in the sky, inhabited by some on the craziest enemies ever burnt to a video game disc. There was so many times when I would just stop and admire some little detail of the game, like those little maintenance droids going about their business along the walls or the complex machinery churning behind various grates. Just marvelous art-design. I also really loved the spider-ball sequences. The ability to boost from one track to the next was a great addition.

Anyway, I finally completed the game today (with 100% scans/items, might I add), and contrary to my original impressions, I now consider it a towering achievement of a game. Prime 1 and 3 are still better, in my opinion, but not by much. Rather it stands proudly along side them, rather than awkwardly in between. I can see why it's not well-liked, but to anyone who tried it once and gave up, I highly recommend you give it another go. You may just love it!! Anyway, Corruption here I come.

Overall, this is an amazing compilation. Metroid Prime was already one of my favourite games, but the Wii controls actually make it better, and combined with widescreen and pro-scan, open up Retro's amazingly detailed alien world. Multiplayer was also a nice touch, but it would've been great if they could have given us a deeper mode for the re-release (i.e. more characters, challenges, online), but I can't complain.