Considering the amount of public praise and critical acclaim The Last King of Scotland (Macdonald, 2006) received, I felt it was a pretty mediocre experience. The best aspect of the movie, by far, is Whitaker's performance, and that isn't saying much. His portrayal of the psychotic military dictator Idi Amin was strong, but not Oscar worthy; not the brilliant spectacle it had been built up to be. I thought his character was very interesting, but was not explored enough throughout the film; divided mainly into a series of strange conversations with Nicholas. Instead, we are forced to spend most our time in the company of the boring and narcissistic Dr. Garrigan, who I felt was explored too much, as I found him to be a very unlikable person. He doesn't come to Uganda for any humanitarian reasons, but for the adventure; and he ends up chasing women more than treating patients. I just can't believe that anyone, less still a doctor, could be so oblivious to the events around them, or so passive in the company of such evil circumstances. The fact that we are supposed to sympathise (or rather tolerate) this selfish individual for the duration of the movie, and then feel triumphant when he escapes his fate didn't sit well with me. The overuse of the films worse character, and underuse of its best, left a sour taste in my mouth, and besides these two, there are no other real people to speak of in the storyline. 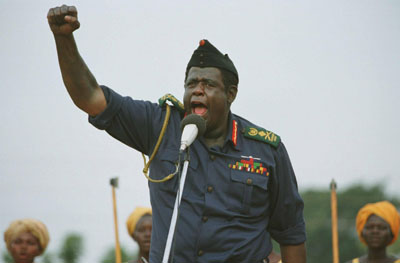 Moreover, I felt the progression from power to corruption was superficially documented. Amin didn't begin his reign as a monster, he become one over time. That is what the novel was about -- Amin's moral degradation through the eyes of Dr. Garrison, but the film just glazes over this transformation with boring dialogue and cheap montage. Another point of criticism is that I felt his portrayal was too reserved, to held back. I never believed he was this great military dictator, because he was unable to show the passion and charisma that his character was supposed to hold. Also, Whitaker wasn't fierce enough for me. He's mostly this playful, cheerful bear, but when he finally does reveal his true evil nature to the protagonist, it didn't properly explore his psychotic demeanor; he was angry, but not the fierce monster his character was supposed to examine.

The movies main problem is that it presents a very shallow depiction of its characters and setting. It has a potentially fascinating subject matter--the mass killings of Uganda and political corruption under Amin--but refuses to examine them on anything beyond a superficial level. Comparing this film to Hotel Rwanda or Munich (two far better films which received far less attention) is an insult. Maybe it was the mass acclaim the film received that made it seem much worse than it really was, but to me, it was a shallow look at a potentially fascinating issue, and without Whitaker's impressive, but short and somewhat overrated performance, it was a very mediocre and disappointing experience. The film ends with our white hero narrowly escaping the Dark Continent aboard a plane, but one can't help but wonder: what about the thousands of anonymous black people left far below? When will their story be told?